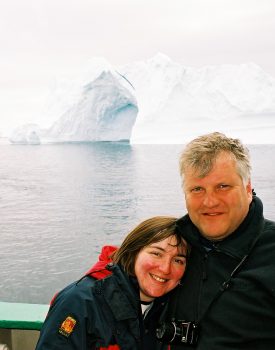 Penguin Corner came about in 2005 just after we came back from a South Georgia / Antarctic trip and found it difficult to buy penguin related gifts.  We thought that it would be helpful to have a single place where you can go to find that perfect penguin gift.

I had always liked penguins, but it was on a beach called Salisbury Plain in South Georgia that it become love.  All down to one curious little King Penguin chick who nibbled my bum while I was lying down watching.  For those who have been to South Georgia, you will understand the sensations you feel when approaching a beach.  The first thing that hits you is the smell, 200,000+ penguin have to go somewhere.  Then it’s the noise, all those young chicks calling to their parents and vice versa.  Finally, when you arrive it’s the sight of thousands and thousands of penguins.  You don’t know where to go, what to photograph first, which penguin you should watch over another.  At least the young Antarctic seals are there to remind you that you need to keep any eye out for more than just the penguins.  There is a rule in Antarctica that you shouldn’t get within 5mtrs of the wildlife, but it looks like no-one has told the wildlife. But Penguins are curious creatures, so if you sit or lie quietly, they will sometimes approach you.  I know some people have a favourite Penguin but I find it hard to say which are my favourite as they all have little quirks:

Rockhoppers: are so feisty and love to push the albatrosses out of the way

Magellanic:  peeking out at visitors from the protection of their burrows

King:  tall and majestic but seem to love hanging around in groups slapping each other

Gentoo:  looking like they are late for a very important meeting

Adelie:  the little comedians of the penguin world

Chinstrap:  they remind me of little policemen

What can I say, I’m now obsessed with Penguins.  I would love to visit them all over the world, you never know may be one day I’ll be able to.

In 2013, we attended our first Penguin conference, which was held in Bristol and met lots of amazing Penguin experts.  Many of them admitted that they referred to Penguins as ‘razor blades with legs’ and had the scars to prove it. Yet they always went back for more.

The next conference is in 2016 in South Africa, where we are planning to visit a couple of the penguin colonies.  There is nothing quite like seeing Penguins in the wild.